In 2017, twenty-six Nigerian girls between the ages of fourteen and eighteen drowned during the Mediterranean crossing to what they thought would be better lives. Ebere Akadiri, herself from Nigeria, saw the headlines and thought that something needed to be done to prevent such misery. I went to the launch of her cookbook, Vibrant West African Cuisine, the proceeds of which will be dedicated to trying to stem the flow of young women in the sex trade. This is the story of how this project came about, in Ebere’s own words.

After giving several cooking workshops in the Netherlands, I felt that the best way to really get what I know about West African cooking out more into the world and to other countries, was to prepare a cookbook. I actually started Vibrant West African Cuisine in 2015 – planning, cooking, writing and editing. I spent money on editing, but somehow I couldn’t find the time or the zeal to do all the things the publishers wanted me to do, especially taking the photos for the book. It was too much work and the thought of doing those photos kind of scared me. So, at a point, I gave up on it. I just said to myself, “Forget about the cookbook, it’s not going to happen.” I completely forgot about it.

Then, in 2017, I read this news about the Nigerian girls that were drowned, that were buried in Italy. Somehow, I blamed myself. I had volunteered for an organisation in Amsterdam that helped rehabilitate victims of human trafficking. Most of the girls are from West Africa. They approached me to teach them how to start up a food business and so, I volunteered. I did that for three months, driving to Amsterdam every week. But I thought, do we need to continue rescuing victims? How can we stop people from becoming victims? There is no dignity in being a victim. At that time, I wondered, is there something I could do? We need to go back home and tell our people to stop the girls from going abroad unless it’s for genuine reasons. But I didn’t do anything about it. It seemed like such a big job, to do fundraising and organizing – I just didn’t have the time.

So when this tragedy happened, I felt guilty. Maybe if I had done something, it would never have happened. That’s when I thought: publish your cookbook, sell it, and dedicate it to this cause. Use any money you make with it to launch a program in Nigeria.

The name of the program came to me: Keep Dignity Alive. Let people not die, because there is dignity inside each and every one of us. I believe that everybody has potential, that if you train them, if you harness their potential, they can use it to gain financial freedom. When you think that people are leaving the country because of poverty, or because they feel they have no hope, give people hope and let them know they can make it. Or if they want to travel, let them know there are safer ways to leave the country. And since I once opened a successful business in Nigeria, I know that young girls can do the same and become successful and they can travel and go back any time they like.

After that, it took me two months to achieve what I had struggled for two years to do. We took the photos, got everybody together… I finally found the zeal to complete the cookbook. At the same time, we started doing our research for what we would do with Keep Dignity Alive.

The way we think trafficking is done is that a young girl is walking on the street and a car stops by and pulls her in and then disappears. We did a lot of research about why girls were leaving Nigeria and discovered that young girls actually look for, and pay someone, to bring them to another country. It’s another type of trafficking where the parents even have an idea that their children are going somewhere that might not be too safe, but they think, “Well, others have survived, they will survive too.” It’s a problem.

The authorities in Nigeria are working very hard to stop this problem. But look at it this way: if an authority stops them on the way, how are they going to know the person is being trafficked? This person doesn’t want to be helped or rescued. In her mind, there is something better out there. She doesn’t even understand what you’re calling trafficking. All she knows is that she is leaving the country for a better life. And then when she arrives, the reality strikes. She probably doesn’t realize she might need to sleep with ten men a night to make enough money to pay her captors. That wasn’t planned. Or sometimes they even think, yeah, you do it and pay the money back, it’ll be ok. They don’t know that they’ll be slaving, that they won’t be making money for themselves for a long time.

A lot of people say that the girls are fleeing poverty. But in Nigeria, this is happening mostly in one particular state, Edo state. What about the other states? Is there no poverty there? So it’s not just about poverty, it’s about mindsets. Girls leaving for Europe in search of a better life has become a norm. It’s that mindset we have to change if we want to stop the suffering. 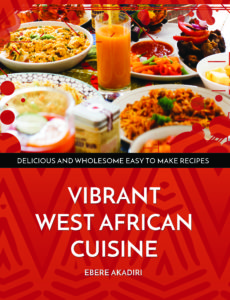 The suffering is what touches me. That they travel through the sea. They sometimes stop in another country and are probably tortured or manhandled. That people even have to die! Why? Why do people have to do this? They lose their lives. They have no legal papers so they can never do dignified work. In the end, they don’t even know how to go back home. And because I have worked closely with some of them, I understand this. They are ashamed to go back home. How do we prevent that?

You can’t just tell people ‘don’t follow’ because they will ask, ‘are you going to give me the money?’ But if we can give hope, if we can train them to start their own businesses, they won’t want to leave. There are so many opportunities now in agriculture back home. They can learn how to farm, they can learn how to process food and even sell it abroad.

With the launch of the Vibrant West African Cuisine cookbook and an online fundraising campaign, Keep Dignity Alive has started working. Right now, we have engaged a PR firm in Nigeria. We are currently doing the planning process to launch in July. We’ll go to Edo state afterwards and do a lot of anti-trafficking workshops in secondary schools. We want to create more awareness of what is going on and, really importantly, get parents involved.

But the plan is so much more than just to create awareness. Through my Ataro Platform we want to create ways for Nigerians to sell their products overseas. Everything is connected. If we help people set up a business, if we help them process and package whatever type of food they like, we can also help them find buyers. If we help them learn how to make very nice clothes, we can help them sell them outside the country. If we get people who have expertise and innovative solutions from Europe, we can support the girls to become entrepreneurs.

When they can sell their own goods and negotiate and make money for themselves, then no one will be thinking about how to leave the country. You know that if you are making your own money and you have your own business, you can go to any embassy and they will give you a visa to travel. If you have business partners abroad, you can visit.

Keep Dignity Alive is not just for telling people about the risks of trafficking and creating awareness, but also to provide alternatives so that they want to stay. We’ve gotten lots of support so far. I’m pleased with the way it’s going. Everything is according to plan.